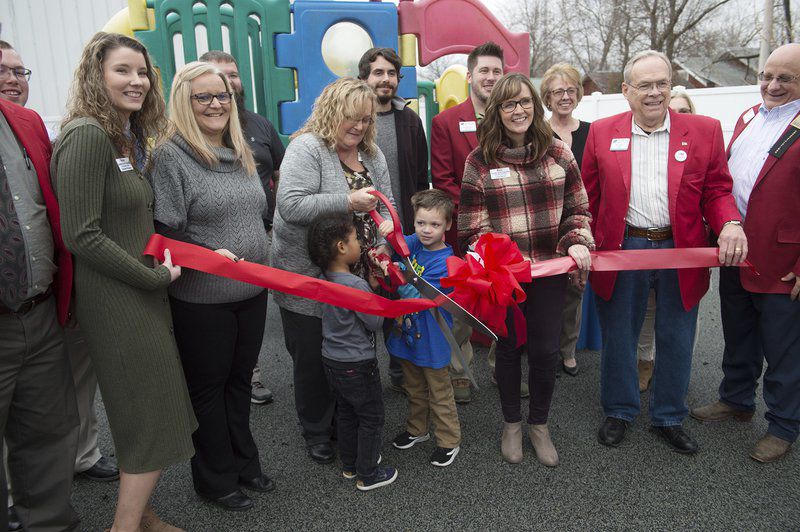 Despite blustery winds and a chance for rain, dedication ceremonies were held Thursday for new surfaces recently put down at two Head Start playgrounds, one in Joplin and one in Webb City, that should reduce the number of skinned knees in the years to come.

A $30,000 grant from the Missouri Department of Natural Resources’ Solid Waste Management Program, presented in October to Economic Security Corporation of Southwest Area, helped fund the application of a poured-in-place rubber safety surface at the two locations, which took place in November.

Made primarily from recycled Missouri tires, the surface was placed around the “fall zones” of various playground pieces, namely swings and slides. Kansas City, Kansas-based Taylormade Co. installed the surfaces, which replaced the rubber mulch and grass at both locations.

“I was like, ‘Wow — this is my lucky day,’” Murphy said Thursday morning. “I’m very happy. The teachers are too.”

And so are the kids. Thor Caughorn, 5 — one of the 55 children attending the Webb City Head Start — was tasked with cutting the playground’s red ribbon. He told his mother, Ashley, that he “runs faster” on the new surfaces.

The new material — a substance that looks hard but is spongy to the touch — will dramatically lessen the number of falls as children run and play each day, said Leisa Harnar, who serves as the Head Start and Early Head Start operations and development director for the ESC. Children’s shoes will better grip the new surface, she said, preventing slips and falls that sometimes occurred with the old mulch.

“There is a lot of difference between running around on (the new surface) and on gravel or loose grass or the rubber mulch,” Harnar said. “We’re just excited for our kids. It will last for years.”

During the morning ceremony at Webb City, a number of local officials were impressed by the new surface, smiling and laughing as they tested it with foot taps and jumps. A similar scene occurred later in the day at Midtown Head Start, as Joplin Area Chamber of Commerce officials walked on the surface, grinning.

The old mulch — completely replaced at Midtown and relegated to non-play areas at Webb City — had caused headaches for parents when the material left black streaks on clothes or shoes. Worse, “we were constantly having to scrape it up and putting it back into place, even replenishing it,” Murphy said. And that cost money.

Installation of the new material at Webb City cost $17,000. It cost $14,000 to install the new surface at the Midtown Head Start in Joplin, which has a smaller playground area. Harnar said the ESC stepped in with an additional $1,000 to ensure all costs were covered.

Harnar said that support from the community, including grants, is paramount to continued Head Start operations — without it, the playground upgrades simply could not have happened.

“Something like this,” she said, “allows us the opportunity to (save money) and not have to buy mulch over and over again. Now, the kids can pop on out there and enjoy it. It’s just a great asset for them.”

But more is involved than a new playground surface, Murphy said. Playing outside, she said, is a crucial form of learning for children.

Harnar said the ESC will continue to apply for grants to fund playground upgrades at the nine remaining Head Start/Early Head Start locations in the area: Carl Junction, Carthage and Sarcoxie in Jasper County; Neosho and Granby in Newton County; Anderson, Noel and Rocky Comfort in McDonald County; and Lamar in Barton County.